A League of Warriors

A League of Warriors

Aware that his past is about to catch up with him, a psychopathic KGB agent requests a transfer to South Africa.  Soon after arriving, the ruthless Morozov leads a small band of guerrillas across the Zambezi River.  Their mission: to shoot down another civilian passenger aircraft. 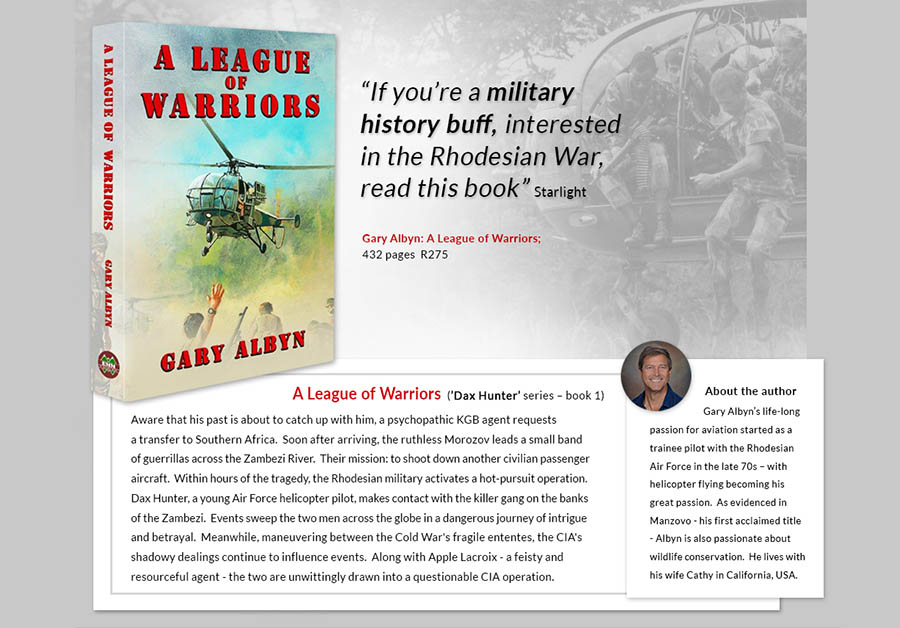 Quite the best book of our times that I have read out of the dozens that I have in my “war library”. I could not put it down and now that I have finished it I am at a loss to read anything anywhere as good as that!

“‘A Handful of Hard Men’ has me shaking with fury at our double standards where whites are concerned, and at the gauzy mythology of ‘political correctness’ that has painted white Rhodesians as oppressors.”

“What we saw on the BBC TV news while all this was going on was the various meetings between Harold Wilson, his ministers and Ian Smith, who had declared independence for Rhodesia. We were unaware of what was actually taking place in the country… Hannes Wessels redresses the balance with an amazing tale of daring and courage.”

“Wessels has a talent for bringing the lengthy list of battles and skirmishes to life. However, his account regularly connects the events in southern Africa to the larger context. Deprived of the opportunity to assassinate Robert Mugabe before he could assume control of the nation and transform it into the horrific slaughterhouse called Zimbabwe, the brave men of the SAS stood down. They did their duty; the loss of Rhodesia was a tragedy willed by forces beyond their control. Wessels’ book is a worthy tribute to their sacrifice, and will be of benefit to all readers who desire a better comprehension of this aspect of the worldwide war against the forces of Marxism-Leninism.”

“‘A Handful of Hard Men’ .. is an absolutely stunning record of the Rhodesian Special Air Service … a soldier’s story told through the weapons’ sights of Rhodesian SAS veterans as they carved through the massed ranks of their enemies – employing ruthless aggression and initiative instead of soft ‘hearts and minds’ COIN policies in a heroic but ultimately doomed bid to stay free from Robert Mugabe’s dictatorship. …. a true story about the death of a brave little nation that went down fighting like demons before impossible odds. Buy it.”

“‘A Handful of Hard Men’ must rank as one of the most riveting books on contemporary African military history that I have read. Hannes Wessels has captured the essence of true combat by this handful of very hard men…I was left breathless and it was as though I could smell the cordite and taste the blood in my mouth. I would highly recommend this magnificent book to any serious student of contemporary African warfare and history.”

“The story of a virtuoso fighter and the brave men who stood with him against impossible odds. Hannes Wessels has achieved a literary grand slam with ‘A Handful of Hard Men’, published in the United States and Britain late 2015. A classic expose of the role of Rhodesia’s Special Air Service during a twelve-year conflict that involved half-a-dozen African states. Public acclaim for the book among military buffs was so enthusiastic that within months it went into a second edition. Readers’ comments on websites (both UK and US) have echoed these sentiments: it achieved more 5-star reviews than any other recent work of Southern African military history.”

“Wessels has produced an intimate study of rugged war that surpasses other publications of this era in its detail of the well-trodden path from Rhodesian schoolboy to soldier.

“… a highly entertaining, detailed and thorough account of the Bush War and the role played by the Rhodesian SAS. Considering the small size of the unit its accomplishments are outstanding.”

“This is the most unbelievable story about an incredible soldier and his other comrades in arms. If you had not recorded this, this story would have never been told.”

“One of the best SAS stories I have ever read”.

“The real deal. The pure, special-forces soldiering of Darrell Watt and his men, is to this very day, jaw dropping. I got scared all over again reading about it. Nothing around the world beats it. These guys would be international legends if they had done this in the service of England or America. The author does a brilliant job of weaving the political threads in time to the years of soldiering. Simple and revealing and awful to read about. The best account you will ever read.”

“This is the first time in my life that I have read a 350 page book in a weekend, and I didn’t skip a single line. What an unbelievable story of toughness, courage, professionalism and sheer grit. For better or for worse, what an era that was, and the nostalgia one gets from reading it is immense.”

“The book was just magnificent. One of the best reads about incredible men (and friends) I have ever read.”

“I am in absolute awe of the courage and bravery shown by the men of the RLI and SAS. I just did not realise, until reading the book, how close we came to defeating the bastards. I have read quite a few of the books written about the bush war and this one is clearly the best.”

“The greatest hero I have ever heard of in Darrell Watt. What an incredible man! I know of some of the actions of our great soldiers, but, never to the extent, consistency of purpose, courage and valour beyond any reasonable expectation of a human being. I sincerely congratulate the author on an excellent book. It captivates one from the beginning to the end and the depth of that time rises up again. Many are saying, as I am, this is possibly the very best book to come out in all the books on the Rhodesian War.”

“Your recent book, ‘A Handful of Hard Men’ is an important contribution to understanding the Rhodesian Bush War. We receive requests for it from Special Operations Command at MacDill Air Force Base, Combined Arms Research Library at Fort Leavenworth and the Marine Corps senior command courses and special operations courses. They use your book as part of their teaching lessons learned in fighting terrorism and in counterinsurgency techniques and practices.”

There are no reviews yet.

Only logged in customers who have purchased this product may leave a review.